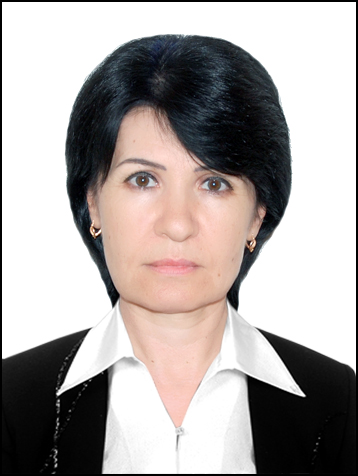 History of the department “Telecommunication networks and switching systems”

During these years, the department provided a large scientific and methodological assistance from the chairs of other electrotechnical institutes of communication. Especially in this work it is necessary to note the well-deserved contribution of the laureate of the state award of associate professor of the department “Telephony” of the Leningrad electrotechnical institute of communications N.V.Zapletyn. He gave young first-come students lectures and practical classes in the discipline of “Telephony”, and also took an active part in organizing and equipping the training laboratory.

Young teachers of the department were constantly sent to target study in postgraduate study in the institutes of communication of the former Union. Of these, the first in the department defended the diploma project and graduated from the electrotechnical institute of communications in the second year of M.Zakhidov. In 1965 he successfully defended his Ph.D. thesis at the department of telephone communication of the Leningrad electrotechnical institute of communications. He returned and worked as a dean of the faculty of automatic telecommunications at the Institute, vice rector for academic work, and then worked actively as deputy minister of communications of the Republic. In 70-80 years of the last century from the CIS countries, the department was joined by other returning gifted young specialists who defended their Ph.D. theses. In this series were the associate professor E.Kh.Allaev, V.I.Suvorov, V.N.Sarev, N.S.Khadzhaev, A.M.Eshmuradov, S.S.Parsiev, R.A.Sharipov, A.A.Adiyarov, R.P.Abdurakhmanov. In the 90s G.S.Kotlobulatov, A.A.Kurmisheva defended her thesis and received a Ph.D. degree of pedagogical sciences.

The work of professor V.M.Son “Parallel commutation package” in 2003 in the United States was adopted as an invention and the author's certificate was given to him. In 2003-2004, 4 scientific articles were published by faculty members in the USA.

Associate professor S.A.Sadchikova in 2012 (under the direction of V.M.Son) successfully defended her PhD dissertation on “Models and methods for calculating broadband associative switching networks”.

In 1972, the head of the department was appointed Ph.D., associate professor I.R.Berganov. A year later the chair was given permission for the preparation of candidates of sciences. In the beginning of the 1970s, the defended PhD’s dissertations of Kh.A.Sharifova, who graduated from the postgraduate course R.I.Isaev, B.K.Abidov, F.B.Kuzakhmedova, and V.S.Sromorshevsky began their work at the department. L.N.Torskaya joined them from the Tashkent city telephone exchange. In the 70 years the department formed its scientific direction. Research works were carried out on the themes: “Suitability for use and development of measures to improve transmission systems”, "Automation of the technical service of the primary communication network".

In 1982, the head of the department was appointed Ph.D., associate professor Kh.A.Sharifova.

In 1983, with the guidance of the senior teacher R.I.Isaev, an optical transmission system designed for 30 telephone channels was developed, prepared and put into operation for the first time among higher education institutions of communication technology. In the same year, the institute was visited by one of the developers of quantum generators, Nobel prize winner, academician of the Academy of Sciences of the USSR A.M.Prokhorov and a member of the Academy of Sciences of the USSR Yu.M.Dianov. They visited the laboratory of the department, got acquainted with the laboratory work on the transfer of information through fiber-optic systems and praised these works. In 1984, for the first time R.I.Isaev began to give lectures on the course “Fiber optical digital transmission systems” to students of the faculty of Multichannel telecommunications and under his leadership for the first time in the Republics of Central Asia and Kazakhstan a 4 km fiber-optic communication line between 34 and 41 ATS of the city of Tashkent. In 1989, a 16 kilometer local fiber-optic communication line was built between the Tashkent telecentre and the center of the Zangioty district, and 120 telephone channels were organized through this line. The Institute at the training and production base developed and built a hybrid solar-wind system for 250 watts providing uninterrupted power for communication facilities. In 1997-2004, 5 kW, 10 kW hybrid stations were built, in 2014 JSC "Uzbektelecom" commissioned solar power plants for more than 40 facilities and in 2010 on behalf of the Republic of Uzbekistan through the Ministry of information technologies and communications of the Republic of Uzbekistan was the work “Solar-wind diesel generator power plant providing uninterrupted electrical energy facilities located in rural areas and in places remote from the mass electricity network” at the International conference “Development of telecommunications” and in 2015 carried out its construction.

By the end of the 80s of the last century, having prepared their scientific research, they defended their theses for a PhD of technical sciences (under the guidance of associate professor R.I.Isaev), V.M.Makhkamjonov and S.N.Ursu.

From September 1991 to January 2005, the duties of the head of the department were again performed by I.R.Berganov.

In 2002 he defended his thesis (under the direction of I.R.Berganov) post-graduate student of the department V.A.Chanishev.

The post-graduate student of the department J.D.Mukimov defended his thesis on the subject: “Information protection of the channels of telecommunication transmission systems"” (under the direction of Ph.D., Professor R.I.Isaev).

Since 2007-2008 academic year at the department, as a result of the initiative and active activity of the head of the department R.I.Isaev and associate professor N.Yu.Yunusov, a master's degree in the specialty 5A522203 – Optical processing systems of communication and information was opened. During the period 2007-2008 2010-2011 this field was successfully completed by 44 masters. During the 2012-2013, 2013-2014 academic years, the master's theses of 9 undergraduates were defended in the specialty 5A301803 – Information measurement systems. Today they conduct their activities in the field of telecommunications and informatization of our Republic and foreign countries.

During these years lecture, laboratory and practical classes were held at the department for students of the disciplines: “Theory of optical communication”, “Methods and means of optical information development”, “Circuitry of optoelectronic devices”, “Theory of stable operation of telecommunication systems”, “Patenting, Licensing and Certification”.

Taking into account the results of these works by the order of the scientific council of the University, R.I.Isaev was transferred to the position of professor of the department, R.N.Rajapov to the post of associate professor.

Since the beginning of the department’s existence, about 4000 specialists have been trained, about 400 scientific articles, 5 textbooks have been created, about 100 methodological and teaching aids have been produced, 20 author’s certificates have been taken, 6 candidate's degrees, about 60 master’s theses.

The new history of the department "Telecommunication Engineering"

During the last 10 years professors and teachers of the department have achieved outstanding results in scientific research, spiritual and educational work. Successfully defended Ph.D. theses S.A.Sadchikova (in 2012), also working in SUE UNICON.UZ. J.D.Mukimov (in 2012) under the direction of Ph.D., Professor V.M.Son, Ph.D., Professor R.I.Isaev.

In the 2019-2020 academic year, defense of dissertations is planned for the degree of Doctor of Philosophy in Technical Sciences (PhD) of teachers: Kh.G.Soatov on the theme "Development of a model for increasing the channel capacity in optical access networks" (under the supervision associate professor A.M.Eshmuradov), G.Kh.Mirazimova on the theme “Methods for assessing the quality of the optical channels of systems with channel multiplexing” (under the supervision of Ph.D., professor R.I.Isaev).

In the last two academic years, 30 scientific articles were published by the members of the department in the journals “Bulletin of TUIT”, “Generation of Muhammad Al-Khwarizmi”, “Bulletin of TSTU named after Islam Karimov”, “Advanced Science Journal” (USA), more than 100 theses in International and Republican conferences.

The curators of the groups at the curatorial hours acquaint students with the decrees and decrees of the President of the Republic of Uzbekistan, the Law “On Education” of the Republic of Uzbekistan, as well as the “National Program for Personnel Training”, the rules of upbringing, the university's internal rules and the activities of communication organizations. Students of the groups actively participate in various activities of the University in spiritual and educational work. The curators also organize excursions to the “Communication history museum”, “Memory square”, the “Amir Temur” Museum, the “Youth activity house”, the National Library named after Alisher Navoi, and the communication organization of  “Uzbektelecom”, the Center for the development of telecommunications and personnel , “UzMobile”. On the hours of spirituality and enlightenment, interviews are conducted on the following topics: “Communication culture”, “Customs and traditions of the people, the basis of youth education”, “The life of great thinkers”, “Vigilance is a requirement of time”, “Fighting terrorism”, “Combating religious extremism and terrorism”.

Also at the department the leading teachers of the department R.I.Isaev, A.M.Eshmuradov, S.A.Sadchikova, M.B.Abdujapparova, A.A. Muradova on the teacher-student system constantly work with the students of the masters.

Disciplines taught at the department 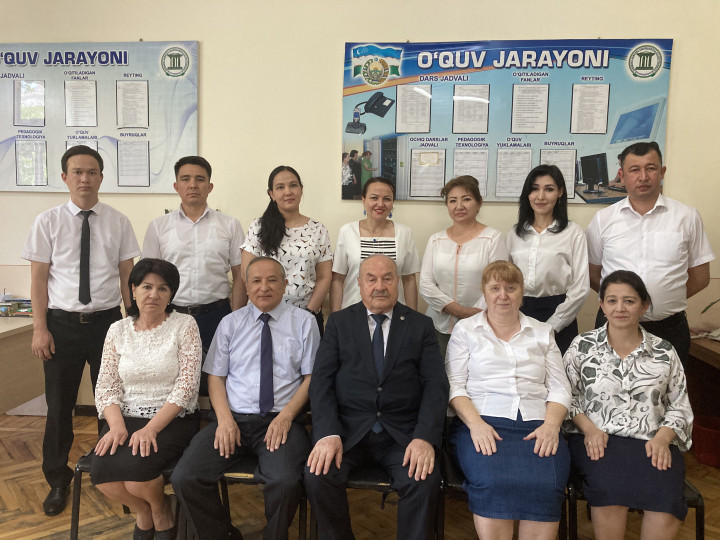 Teaching staff of the department

State and foreign grants implemented at the department:

Scientific and methodical works of the department

International relations of the department

Promising relations of the department with enterprises of the sphere